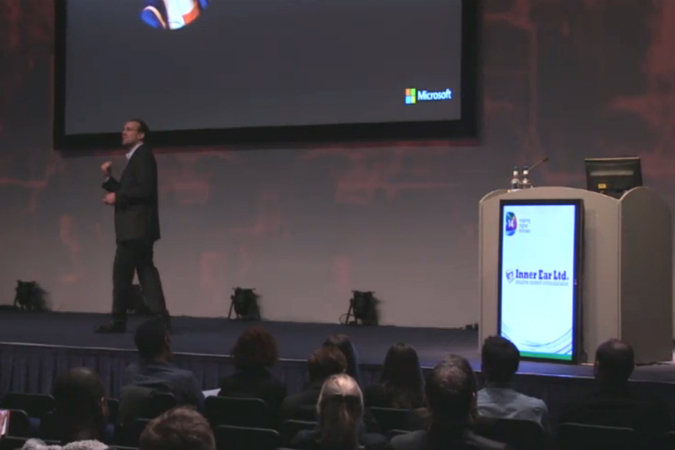 On 29 and 30 May 2014, the digital and creative sectors came together at the SECC in Glasgow to explore ways to collaborate through an day-long programme of keynote presentations, seminars, networking, and an interactive showcase.

Inner Ear were asked to provide a live stream of the entire day long event, streaming video content from the main auditorium and the various studio sessions which took place throughout D14, Scotland’s flagship digital summit. We also hosted our own stall in the networking area of the conference, complete with a selection of iPads demoing the apps we have produced, a big screen displaying the live stream and Inner Ear showreels, and a prize giveaway with 2 exclusive tickets for both the SAY Award and Sound To Sea events up for grabs. Winners of the competition will be informed via email.

On the evening of Thursday 29 May, Inner Ear and Radio Magnetic DJs took to the stage to provide the soundtrack for the introductory networking event, complete with speakers, interactive stalls and many fine foods and drink on offer. As part of our set, we projected (and played) some music videos and live music sessions we have produced in recent years up on the big projector, audible and visible to all attendees of the evening event.

On the Friday morning, prominent speakers from Interactive Scotland (Mark Bell, Head of Enterprise and Innovation, and Alisdair Gunn, Project Director) welcomed the delegates in the main auditorium. They then handed the microphone over to Microsoft’s Chief Envisioning Officer, Dave Coplin as he spoke about “Envisioning the Digital Future” with reference to his book, ‘The Rise of the Human‘ and why we should sometimes put down our phone/tablet/laptop and enjoy being human and our real life, away from the screen. The morning session also saw Tony Ageh from the BBC discuss Thinking Knowledge” with delegates, and from the Glasgow School of Art, Professor Irene McAra McWilliam spoke passionately on “Designing Towards Innovation”.

Watch the morning session of talks from D14 on demand below.

After a break for coffee and some more delightful food, the afternoon studio sessions took place in the main arena at the SECC, set up to house talks and discussion on various different digital themes, including Digital Health & Care, Education, FinTech and Retailing. Amongst the experts leading these sessions, we heard from representatives of organisations including people from the BBC, NHS 24, Standard Life, PA Consulting, and many more.

We provided a live stream from the retail tent on the day, with all other simultaneous talks taking place, captured and recorded for later release (stay tuned to this page and twitter.com/innerearuk for announcements in the near future). These afternoon studio sessions saw an interesting retail talk from Richard Unwin from Backbone IT on how Scotland could improve it’s approach to e-commerce and do more in the way of online selling, focussing on sales as opposed to likes. This sparked some interesting discussion amongst delegates, as did John Andrews from International Omni Retailing Markets Association, talking about driving omni commerce markets and more.

Watch the afternoon Retail studio sessions back anytime on Livestream

After another break for teas, coffees and more networking, delegates returned to the main auditorium for further talks and presentations from key speakers in the digital sphere. These closing afternoon sessions featured a varied array of organisations and speakers, including Johnston Press and the founder of the Government Digital Service.

Jeff Moriarty, chief digital and product officer for Johnstone Press spoke convincingly on the dissemination of information and how his organisation works to reach audiences in most effective, convenient and progressive manner. This closing session also saw Roger DeAth from UK Search and Google speak informatively on the definition of a digital enterprise and Chris Aitken alongside pupils from Wick High School taking delegates through innovative apps the young people had invented and produced and the benefits of doing so.

The final produced video content from the event will be published very soon, and posted on this page once publicly available.

To find out how Inner Ear can help increase your reach and bring in new audiences for your event, get in touch to discuss live streaming possibilities and the kind of services we can offer you and your organisation.