How we provide Music Supervision services for Waterloo Road

Following up on Inner Ear’s successful music consultancy work for Shed Media on ‘Waterloo Road: Reunited’ in Autumn 2010, we were invited to pitch to provide music supervision for the main BBC One show, a role which seemed only natural for our team to get involved in with our previous experience and reputable name in the Scottish, and UK-wide, music scene.
We took over from Iain Cooke, a highly regarded music supervisor we who we really respect. He used to be Grand Central Records’s label manager (which was one of our favourite labels and did the Counter Culture show for us on a weekly basis for years). When we told him we were working on Waterloo Road he was very encouraging of us. The reputation we built in music through our own Radio Magnetic, give us credibility and connections within the music industry. (Indeed, Radio Magnetic is credited as the Music Advisor for the show.)
Amanda Mitchell, Inner Ear’s Music Supervisor tells us more about what’s involved…

Our first foray into broadcast TV music supervision has been a very exciting project with major production company Shed Media commissioning us to take care of all the music for this 9th series of BBC One’s Waterloo Road.

Aiming to control the growing use of commercial music in television, the job of Music Supervision for the show involves both the monitoring of what is being used and the payment to the artists for the use of their music.The role basically does what it says on the tin, supervising the music. This can vary for different productions and working with different individuals but it essentially involves two main strands: the selection process and the clearance process.

The clearance process can be the less exciting part of the job but certainly the most important, as we are dealing with the licensing of the music, ensuring permission has been granted and royalties can be paid to the artists. In the instance of Waterloo Road, we also collate all the relevant metadata attached to the music that has been included in the episodes which is then processed into a BBC reports. Some mainstream broadcasters will have a blanket agreement, which is designed to simplify and speed up the process of licensing music on a mass scale (in comparison to individual licensing deals made by independent production companies who have to deal with the label directly) and by third parties working on a freelance basis for major networks. This is reflected in an online service which generates a certificate for each track used, on the basis that it meets the criteria of the blanket agreement and doesn’t contravene the list of music which isn’t covered. Then the copyright team at the BBC, who deal with the labels directly, compile the the data and copyright holders will be paid (i.e. songwriters and publishers by PRS and sound recording owners, record labels and performers by the PPL).

Although the clearance process is simplified to the extent that we don’t have to negotiate with the labels directly over payments, we still get to deal with them over obtaining music, which Inner Ear already does regularly through Radio Magnetic. We get sent loads of upcoming artists and forthcoming releases, so it can be very exciting and rewarding to see a track make it into a transmission episode. A personal highlight would be using the track Keep Your Composure by The Chemical Brothers on a boxing scene in episode 6 which I pushed for in particular, and really gives the scene an extra dynamic, packed with energy and tension. When you are sitting in the edit and you pick a track that just transforms a scene, it is so exciting.

Another great element to working on Waterloo Road is the huge social media response to the show. We monitor what the audience say about the music and take this into consideration when making selections or pushing for certain tracks. It’s very rewarding to see the positive reaction to the music. 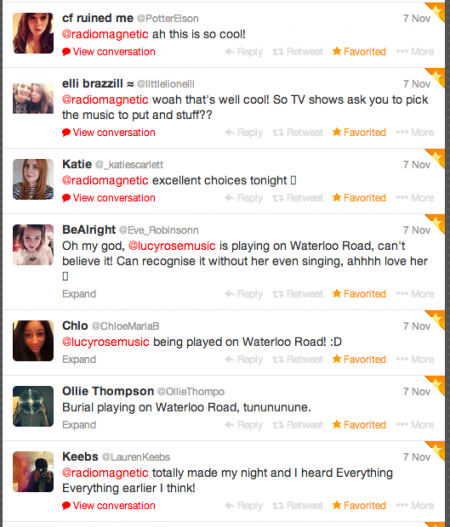 Inner Ear also provides copyright consultancy for live streaming, audio and video production and branded content. If you want to find out more about Inner Ear’s Music Supervision services, please get in touch.