Catch The 365: Live Streaming from a Moving Bus

To promote the UK launch of Microsoft Office 365 in the UK, creative content communications company Inner Ear was asked by international digital PR and social media agency 33 Digital to film and deliver a live streamed internet broadcast of a day of events taking place on board a moving Routemaster bus, driving around central London.

There were many interesting challenges involved in achieving a smooth day’s broadcasting from the vintage bus. Inner Ear‘s head of video Andy Brown explains exactly what it takes to broadcast live video ‘on the move’… 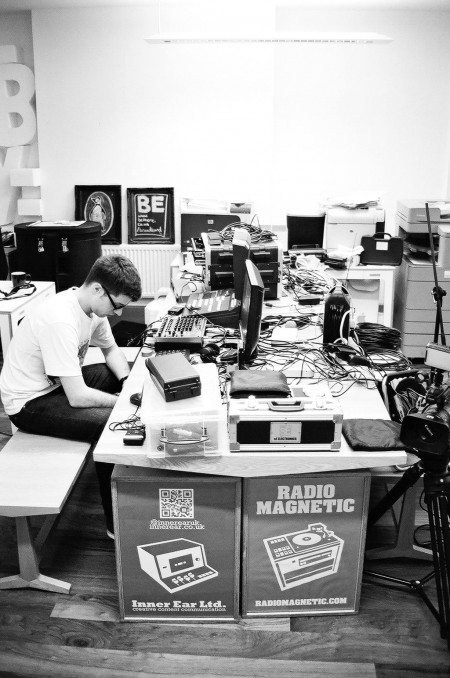 At the end of January 2013, for the UK launch of Microsoft 365 in London, 33 Digital pioneered the idea of driving a Routemaster bus around central London filled with bloggers, celebrity speakers and day-to-day techies all sharing information on how they use Microsoft products. All of this would not seem very 2013 unless someone could share this event while it happened. Not normally possible on a bus but this is where I joined the Inner Ear Stream Team (Matthew, Shaun, Dougal and myself) to push the event across the world via the internet.

We’ve been helping clients of all kinds stream events more and more over the last three years and consider ourselves very well equipped with kit and knowledge to stream from pretty much anywhere! From a stunt bike expo at the Riverside Museum in Glasgow to the Heart of Hawick theatre in the Scottish borders, Shetland Jazz Festival on Lerwick and Blair Atholl Castle in the central highlands to a bus driving around Central London, it is something myself, and everyone at Inner Ear, are pushing boundaries and enjoying helping clients stream events they never thought could be possible. 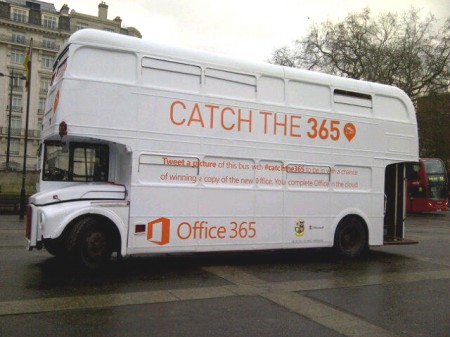 In London, onboard the #CatchThe365 (to give the activity it’s #hashtag), we decided to rig three cameras and a couple of mics downstairs on the bus to our audio and vision mixers upstairs where we set up mission control. To give the cameras some length we rigged up the BNC cables (for video) and paired them with ‘talkback’ kits which enable the camera operators to speak via headsets to Shaun, our vision mixer, who can then help with direction, framing and positioning of shots. I’m glad we had plenty of electrical tape for securing the cables as everyone, including camera operators were going to be hopping on and off and we never want trip hazards, especially live on the internet (although think of the YouTube hits). The HD video signal was then fed into our streaming computer and sent to a dedicated Livestream.com (our favourite streaming service provider) channel to broadcast publicly online.

In order to supply the WIFI signal to broadcast the live video stream we needed a very special mobile broadband device box, made by Viprinet, supplied and supported by Prodec Networks, which bonds together the 3G (and now 4G too) power of three SIM cards and creates an internet connection more than strong and reliable enough to stream HD video. A very cool gadget and something we could not have done the job without. Plug and play with an ethernet to your main streaming computer and you can stream around central London! The great people at Prodec even tested the Viprinet box at several of the locations we would be traveling to (and passed) to make sure we’d be fine.

On the morning of the job, we arrived at Marble Arch at 8am just as the morning commuters were beginning their journey to work. I was main camera operator so I started to set up shots in my head and plan out the day before we hit the red button. As always, planning ahead, thinking of what may happen and having shots in mind can help so much.

Filming began after 9am with our presenter, Zoe Cunningham (an experienced broadcaster and technology blogger), doing a piece to camera to introduce the #CatchThe365 activities to the live stream audience. Then we were offski, making our way slowly from Marble Arch to Leicester Square in roughly two hours filming and streaming everything that went on inside: a magician, a small band and talks from Will Greenwood, Tess Daly and a selection of “mummy bloggers”. We had thought about various contingency plans which took into account all the differing levels of equipment and their importance in the daisy chain. However, we didn’t think about one thing: the old Routemaster bus breaking down.

Breaking down in central London on a busy Wednesday morning meant we had to abandon ship, at the request of the driver, and we, at the request of 33 Digital, all swiftly moved the equipment to a conference space in a hotel near Leicester Square so we could carry on with the live streamed talks. Meanwhile, the bus was waiting to be jump-started and would then move to Leicester Square to continue the public engagement side of things.

Striking down gear from the broken down bus was fast. Cable runs were carefully pulled back upstairs and power supply’s switched off as we packed up moved on. The biggest challenge of the day was resetting the kit ready to go in under 30 mins at our new location. Thankfully, everyone knew what goes where and we hadn’t forgotten anything on the bus so we were good to go. Improvising and problem solving are part of the job and after all the talks were finished it was time to break down for the last time and get a drink in the hand.

The 33 Digital team were very happy with how we worked and adapted to the changing situations and although it would’ve been nice to carry working on the bus all day, running with a wee spanner in the works keeps you even more on your toes. I guess working with technology (this time old Routemaster bus technology) is the same as working with kids and animals on live TV. It comes with risks! Doing a job like this has opened up the door to lots more ideas behind on-the-go streaming jobs for clients as we know it is possible and we are more than comfortable doing it. Next time let’s go for one of those new eco-friendly red top buses.

Below, see footage from the event on board The 365 bus, produced by 33 Digital.

Delivering this unique form of HD live video streaming helped to launch Microsoft Office 365 in the UK in an innovative and memorable way. Inner Ear specialise in this combination of creative concept, media production, live streaming, recording and production. The team work on location and in the studio on a wide range of projects and can offer many other digital media services, tailored to a client’s needs. Get in touch to discuss how we can create and use live streaming to help build your brand, extend your reach and develop your audience.

Manage Cookie Consent
To provide the best experiences, we use technologies like cookies to store and/or access device information. Consenting to these technologies will allow us to process data such as browsing behaviour or unique IDs on this site. Not consenting or withdrawing consent, may adversely affect certain features and functions.
Manage options Manage services Manage vendors Read more about these purposes
View preferences
{title} {title} {title}